I totally believed the ‘egg’ commercials that they showed impressionable teens in the 1970’s and 1980’s on TV and in schools: 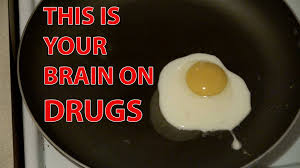 I just knew that if I were to ever take even one hit off a joint, my brain would look like the egg in the commercial….fried, broken and runny, they did a fine job finding their targeted audience with me.  And then there was college. Maybe my pot experience was so bad because I still had the egg picture in my soon-to-be-fried-brain. I was a terrible pot smoker, the highlights consist of me being paranoid and hungry.  I only took a few hits (like less than 10) spread out over a year or so because I was giving my brain the needed time to heal in between hits while feeling like one of the cool kids. Hash was worth a try, twice I went out on this limb. No paranoia but I had some pretty nasty finger burns from the hot knives…..look it up.  And I had no money to spend on drugs or cigarettes which set me up to be a total loser in the addiction department.

I can also attest to taking a few hits between the ages of 22 and 57. Again, paranoia  would set in and I was positive I’d be caught, sent to jail with my reputation in ruins and my family humiliated by my rap sheet.  Literally, I was sure I’d be the woman walking down the street with: I’m high and paranoid and hungry, emblazoned in white lettering on a khaki green jacket that everyone could see while scarfing down a bag of Fritos.

Fast forward to lung cancer and the magic world of medical marijuana for cancer/chemotherapy side effects. I tried the CBD chews first and they helped a bit, but then I decided why not brownies?  Chocolate brownies after all because chocolate is healthy. I’d tried brownies before and edibles are unpredictable. “Should I eat this much or this much? I don’t feel anything yet, should I have another bite? Wait, what was that sound? Did you hear that? Are those llamas?” Again, paranoia sets in and the high that everyone tells me I’ll love fades away into the sunset, unrequited. Then I decided to jump in feet first and make my own brownies.  MY BROWNIES included medical grade marijuana steeped in coconut oil. Seemed easy enough because I had a Ghirardelli brownie mix right there in my pantry, a bowl, spatula, eggs, water and ‘special oil’ aka: mary-jo, weed, pot, bud, dope, grass, whacky tobacky, ganja…..did you know that there are over 1000 names for marijuana going back hundreds of years? Now of course we refer to it as ‘cannabis’, it sounds so much more official and acceptable.

To those of you that make just regular brownies, when they are cool and ready to be cut, haven’t you ever so sneakily cleaned off the knife and eaten the goo? There aren’t even any calories in brownie goo, right? Just to be on the safe side for the first batch I wouldn’t eat an entire brownie, I would be prudent and just eat the goo. After all, it’s a small knife, not even a half a brownie in total goo! If I would have followed the directions, I would have only eaten a very ‘teenie-tiny-bit’ and then waited a couple of hours to see what the effect would be. But I was remembering the good ol’ days when eating the goo off the knife was perfectly safe, calorie free and non-hallucinogenic.

Two hours later I was awakened by a barking dog. I didn’t even know who’s dog because in hindsight, Tess’s bark sounds like a trumpet with a rag stuffed in it. This was a BIG dog bark, and it was in my house. I rolled out of bed, waited until my legs felt like they were on the ground and walked through the house, upstairs and down. Don’t ask me how I got down the stairs or back up because I don’t have the foggiest. But, I do know that there was no barking dog to be found. To make matters worse, I found Tess on her pillow with that bored, “why are you walking around the house at 1:00 am you silly human!” expression on her face. 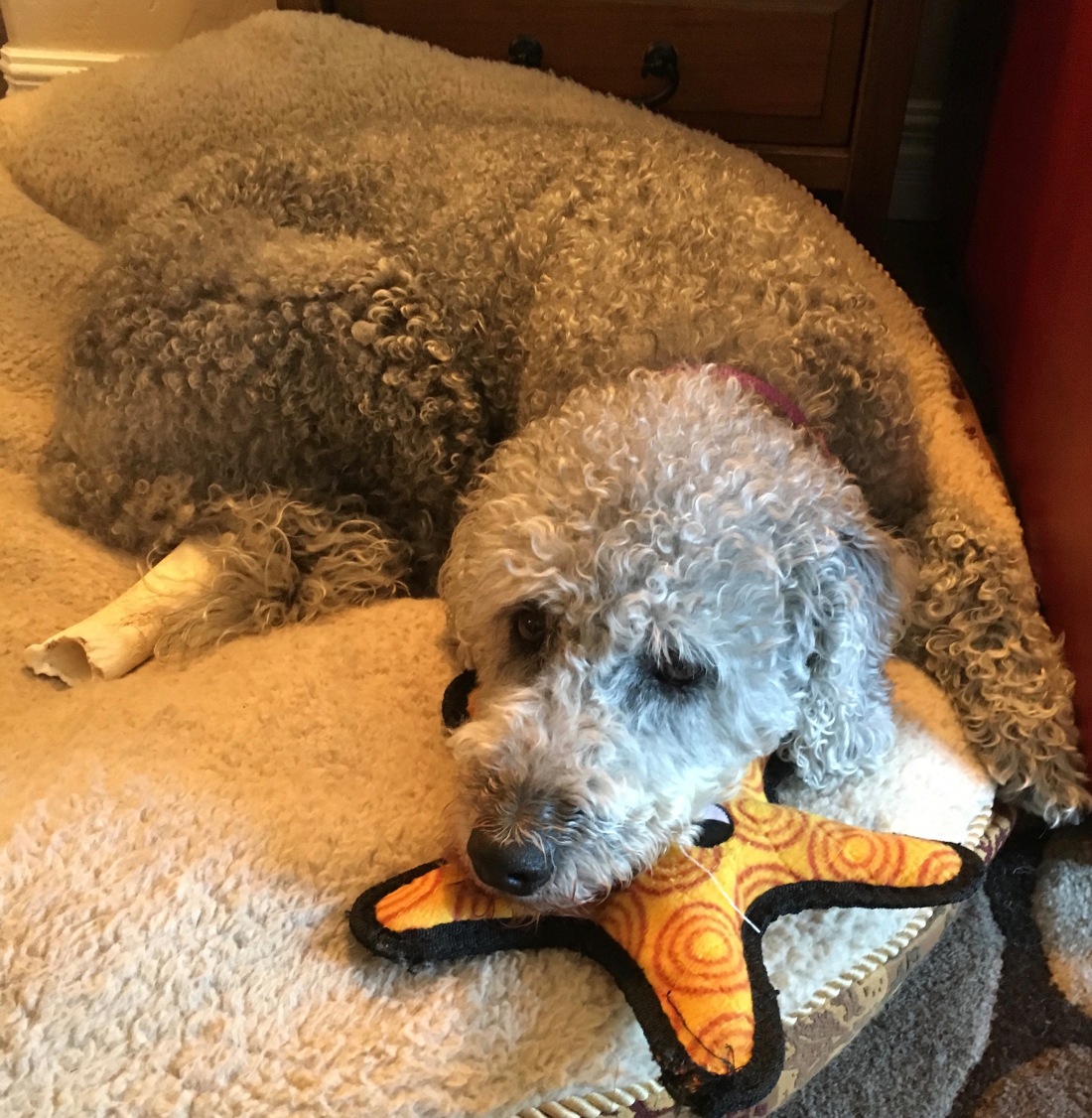 An hour later and again with the barking dog! More insistent, louder, demanding that I come and find it. This time however I was incredibly dizzy. I used the walls to steady my gait until I got to the living room and its one step. ‘How will I navigate the step?’ I ask myself. “Slide down on to the ground and make your way…” my fried-egg-brain-on-drugs told me. Of course, and down to the floor I slither for about 3 feet.

OH NO! I can’t stand up! I’m stoned out of my gourd! I can’t control this! OMG…what if the oil was actually laced with LSD and I’m having an acid trip and I might never come back! Oh the tragic-ness of it all! I won’t die from lung cancer after all! I’ll die from bad-bad LSD laced marijuana brownie goo! They will find me in my jammies…in the middle of the floor wrapped around an easy chair holding on as if it were a deck chair on the Titanic!

And then a thought occured; “wait a second, Peggy! People pay good money for a high like this! Embrace the lack of control, what’s the big deal, you might just have a profound enlightening experience!” And then I fell asleep hugging the chair. Luckily, I did wake up in time to make it back to bed before Jim saw his wife of 36 years on the living room floor hugging the afore mentioned chair mumbling about barking dogs.

On a serious note, medical marijuana has been a godsend in regards to my ability to sleep. I eat a ‘teeny-tiny’ square of brownie before bed and sleep like a baby. It’s my dessert and my sleeping pill and I just might be addicted, but I’m addicted to sleep, which is a good thing, and I’m not in jail and the dogs no longer bark in my non-fried-egg-brain.

Branching out…there are so many things cancer teaches us.

And now it’s time for my brownie.

I am a wife, mother, lung cancer survivor and advocate committed to living life fearlessly. View all posts by theinsightfulbreath

2 thoughts on “My Brush With Delinquency”